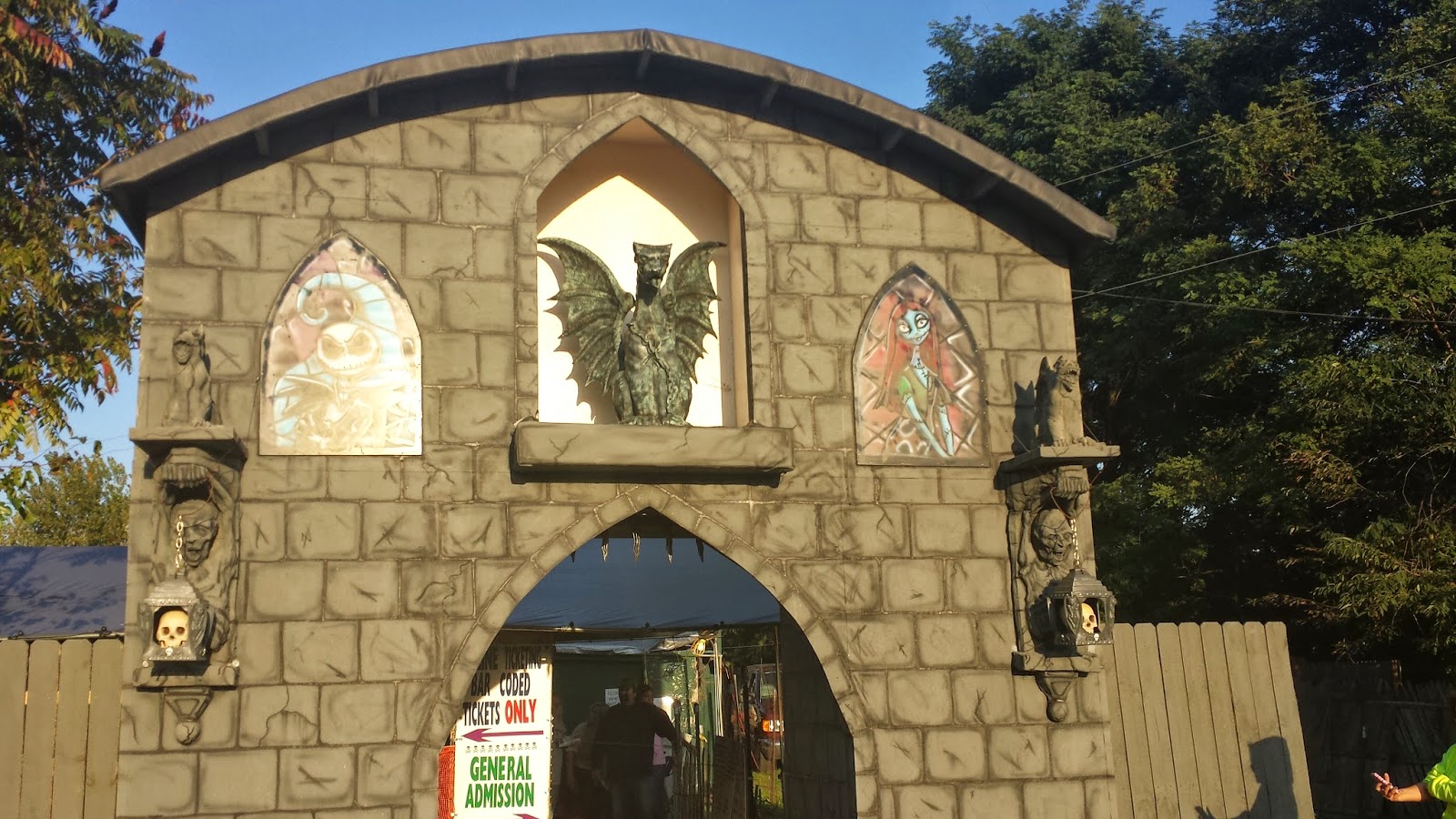 By the time one gets to the professional haunt level, finding that welcoming feeling can be difficult. In our experience, the bigger and more hyped a haunt is, the easier it is for it to feel impersonal. . We’re happy to say that Niles Scream Park is a big haunt with a small town feel – a professional operation with a lot of heart, and that heart is what makes it so enjoyable for us.

Full Review
Posted by Unknown at 11:21 AM No comments:

Welcome to the (Haunted) Neighborhood - New Haunts for 2014

Each year we Horror Tourers look forward to the new haunts that open, as each new haunt brings with it the anticipation of seeing something completely new and different. While we love seeing a lot of our old favorites, there’s always that special thrill that we get when we’re entering unexplored territory.

2014 is shaping up to be a smaller year in terms of the new haunts that are opening up, but there are a few. First, and perhaps most interesting, is the opening of the 13th Floor in the former Eleventh Hour space in Melrose Park.  For those that don’t know, 13th Floor is a chain of professional haunted houses with locations in Denver, San Antonio, Phoenix, and now Chicagoland. 13th Floor boasts Hollywood style makeup and effects and intense scares, and has a reputation for excellence. Here’s hoping that it does live up to the hype.

And speaking of hype, another new haunt this year (albeit in perhaps a temporary fashion) is Rob Zombie’s Great American Nightmare, located at the Odeum in Villa Park, formerly home to Asylum Xperiment, one of our top haunts for 2013. We get the impression that the Zombie presence is strictly a one time thing, but we’re not sure on that. Featuring three haunted houses, each focusing on a Zombie movie (Lords of Salem, Devil’s Rejects, and Zombie’s animated The Haunted World of El Superbeasto), American Nightmare promises some high level scares and weird experiences.
However, the attraction has garnered mixed reviews on various online outlets, so we’ll reserve judgment (and our decision to visit) until we see some reviews of the 2014 incarnation.

Not completely new, but new as a professional haunt is Midnight Terror in Oak Lawn (www.midnightterrorhauntedhouse.com). This is one of our favorite home haunts, even making our Hall of Fame for 2013, so we’re especially looking to see how well it translates to a professional setting. Also under the “not completely new” banner is D.E.A.D Rising, located in the former House of Nightmares space in Alsip, IL. D.E.A.D Rising was around last year in another location and with a slightly different name (D.E.A.D. Central). We enjoyed it, but it was quite short for the price, so here’s hoping the change of location will result in a bigger and better haunt.
Posted by Unknown at 8:30 PM No comments: 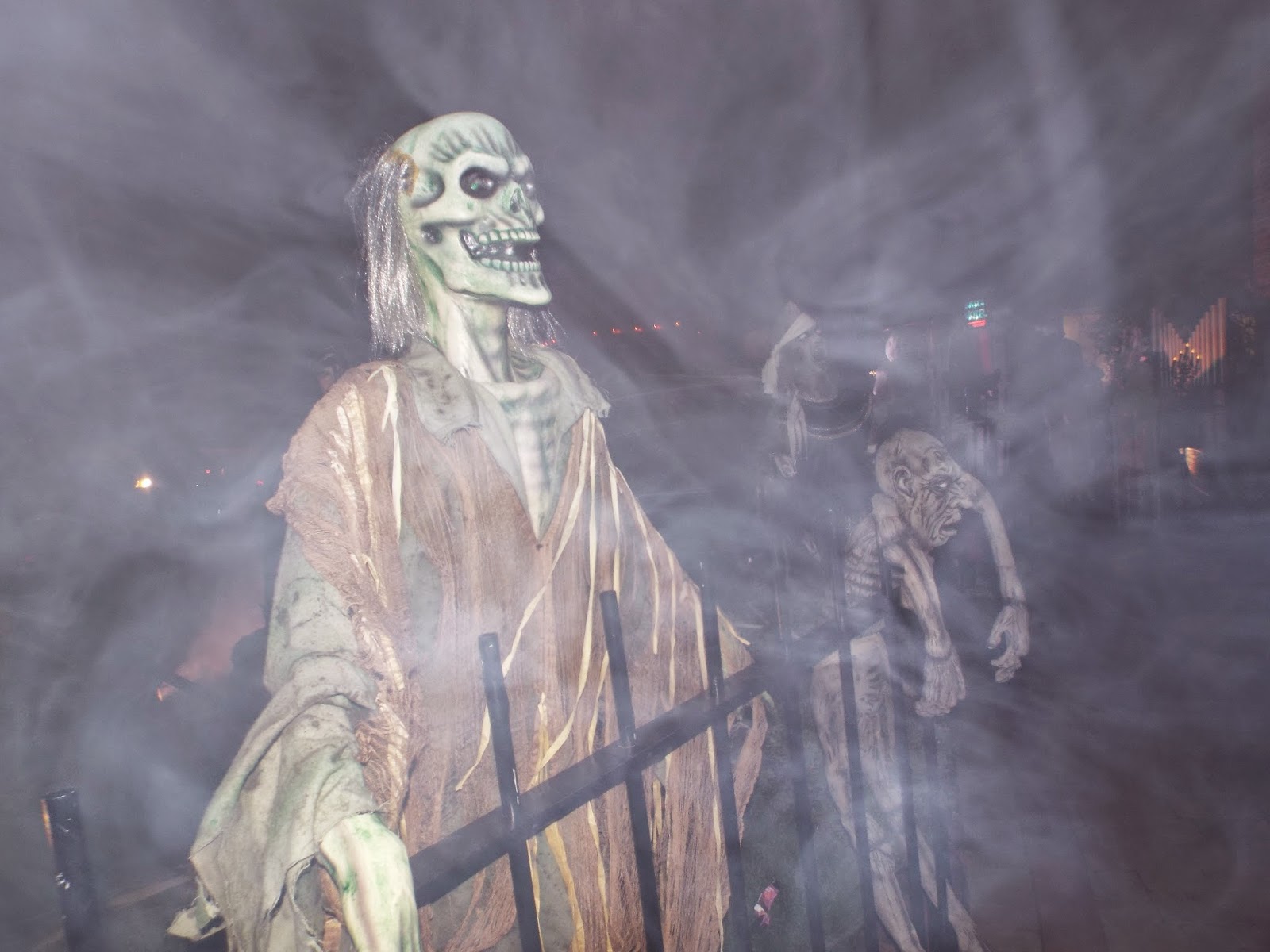 Shurley House is one of the Horror Tourers annual favorite haunts. There is so much to see here that one can easily spend 20-30 minutes just looking around and making sure that nothing is missed. The front yard is packed, and the displays carry on up the front walkway, onto the porch, inside the rooms on the bottom floor, and even in the windows of the top floor. In addition there are more props along the driveway and even hanging from the house itself. If you don't look closely you'll be sure to miss a display of some kind.

Full Review
Posted by Unknown at 7:47 PM No comments: 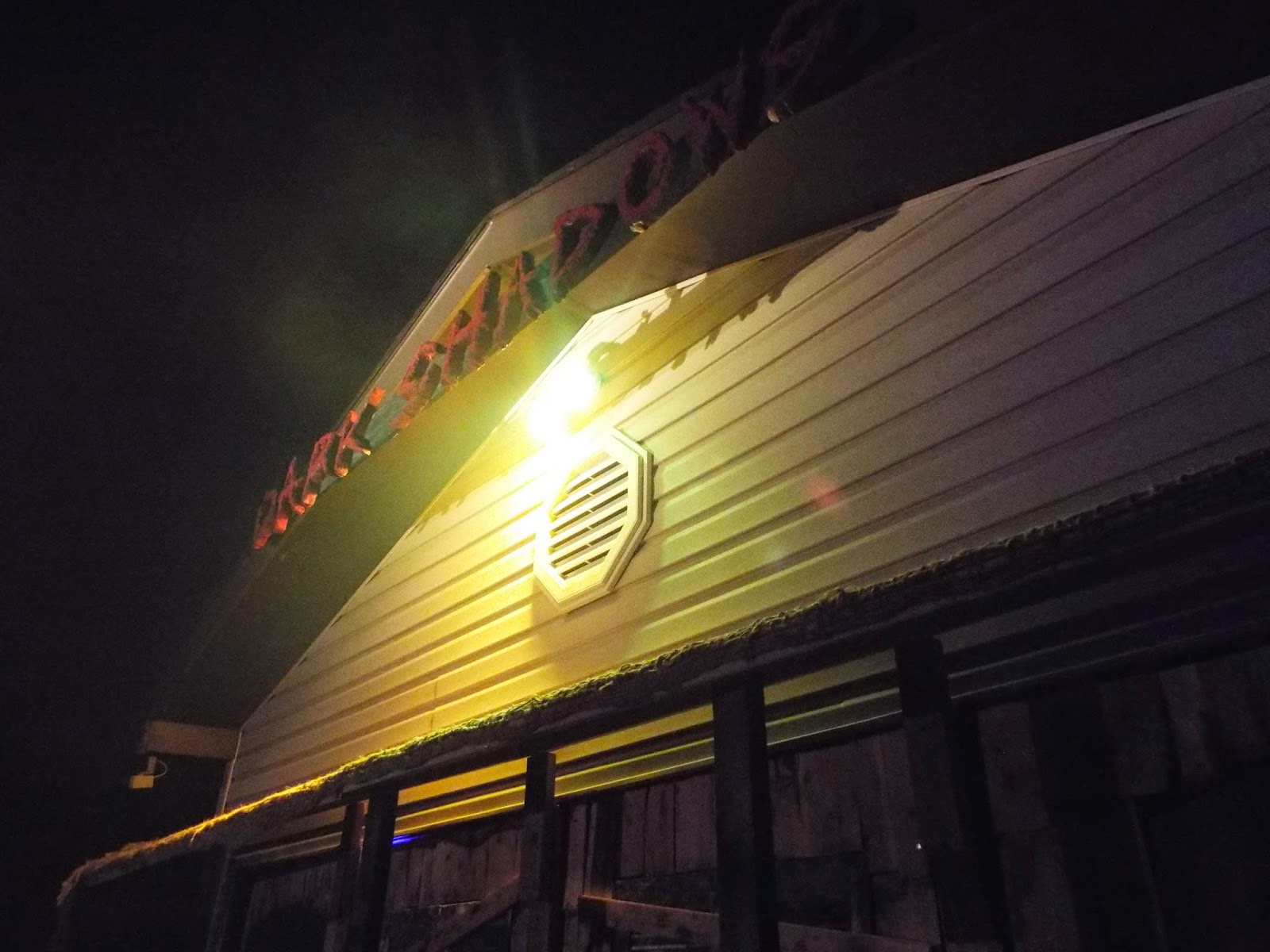 Up next is the very first home haunt we ever visited - Dark Shadows Home Haunt﻿ in Orland Hills, IL. It's hard to beat Dark Shadows for its atmosphere. The hard work put into it really shines, and we make a point of visiting this one every year. It's really fun to just look at all of the props and see how well crafted they are, and the garage haunt is always good for a startle or two. For those thinking that home haunts aren't worth it - think again. For no cost (unless one wants to donate), one gets a display and a haunted house walkthrough.  Do yourself a favor and check Dark Shadows out - you'll be glad you did!

FULL REVIEW
Posted by Unknown at 7:20 PM No comments: 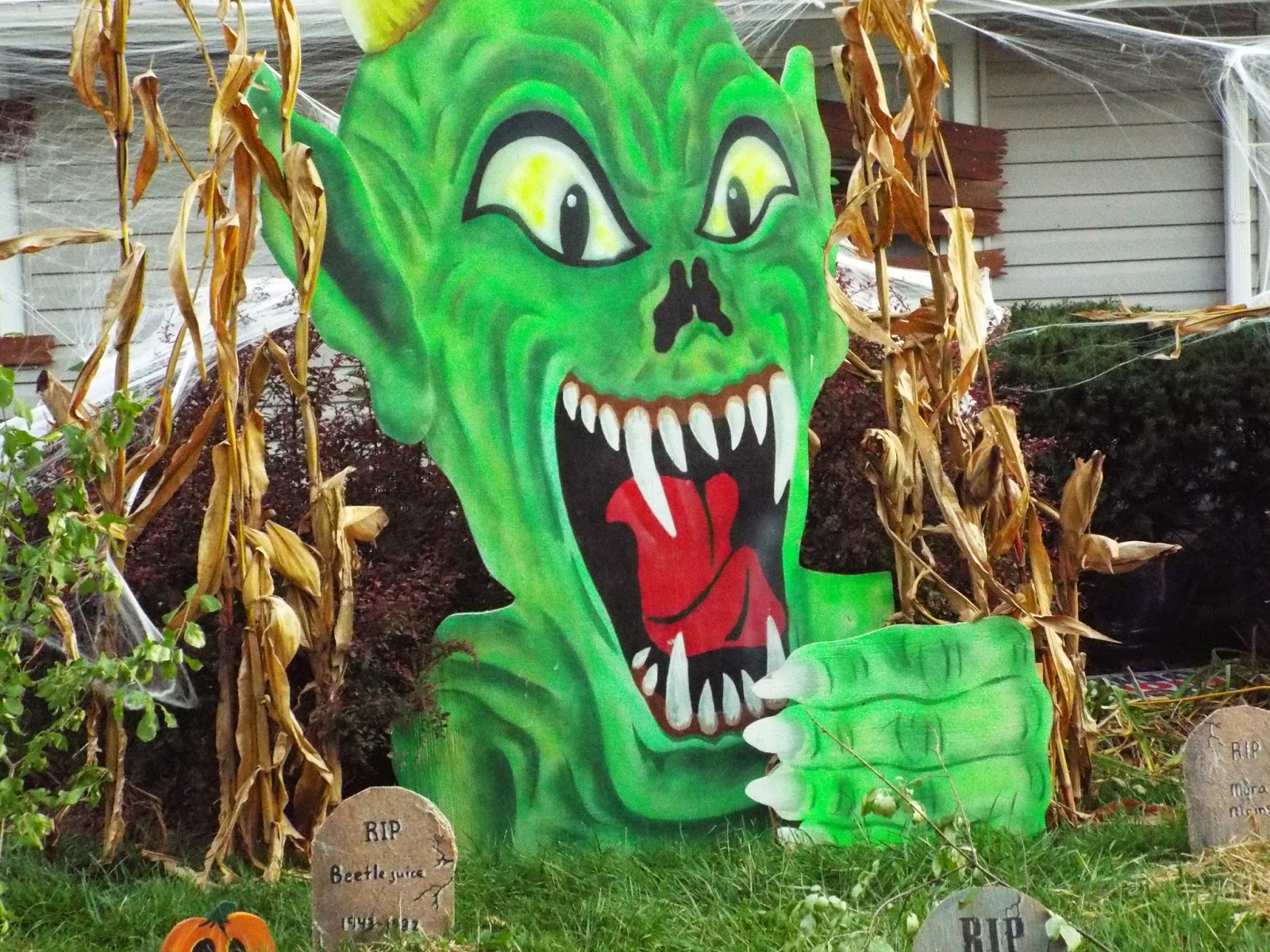 House Decor is a yard display located in Lockport, Illinois, home to the famous Thanatophopbialand. We made our first visit there in 2013, and found it to be whimsical and fun. Although not high on scares, it was creative and enjoyable nonetheless.

FULL REVIEW
Posted by Unknown at 6:47 PM No comments: 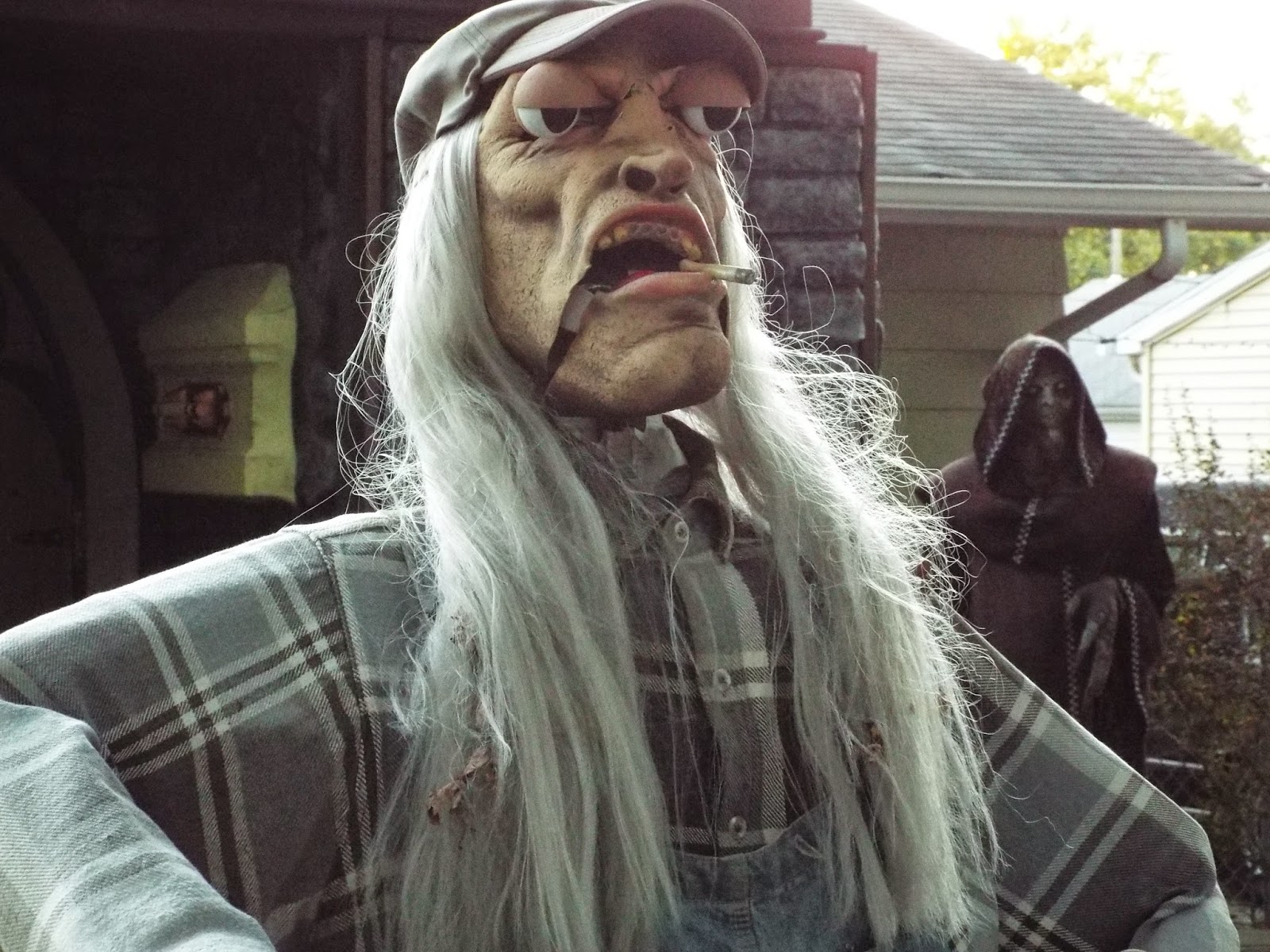 One of the things that we look for in a haunt in originality. It's that quality that can give a yard display the advantage over a professional haunt. And one haunt that is definitely original is Thanatophobialand.

Thanatophobia refers to the fear of death and, true to its name, there is a lot of death on display at Thataophobialand. From its front yard full of tombstones to its multiple real hearses to the garage that's set up like a funeral parlor, visitors find their fill of death scenes here.

However, unlike some typical yard displays, a lot of Thanatophobia's setup is done with tongue planted firmly in cheek. Full Review here.
Posted by Unknown at 6:16 PM No comments: