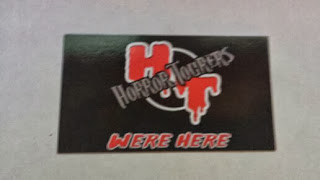 We at Horror Tourers will officially start the 2013 haunt season tomorrow, with a visit to several local attractions. We have some last minute finalizing to do, but we'll either be at the Niles Screampark in Niles, Michigan, or Evil Intentions in Elgin. There's not a lot going on this weekend, but we like to make sure we maximize the haunt season.

At right is our "we were here" card - as we tour around various haunts, we sometimes run into the owners/operators, but other times there's no one around. Thus, we like to leave a card to let people know we were there and that we'll be reviewing the haunt.

If you are an owner/operator and see this card, you'll know we've been there, so look for our review!
Posted by Unknown at 7:26 AM